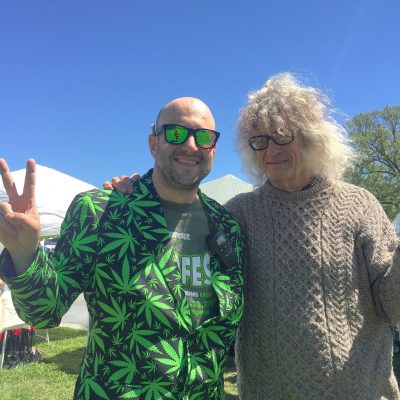 As Otts says, “Police were there. The smell of cannabis in the air.”

And, he says, “It was the first time to throw a festival of this size and it blew up so big.”

The purpose of the event was “ to raise awareness of the benefits of the cannabis industry in Tennessee,” says Otts, who is president of The National Organization for the Reform of Marijuana Laws (NORML). “The reason I say ‘cannabis industry’ is there is a common misconception that there’s a difference between hemp and marijuana. It’s all one versatile plant. The THC inside the hemp plant is what differentiates it from marijuana.”

The hemp for sale at the festival was “100 percent state grown legal industrial hemp.”

Hemp Fest drew vendors from as far away as Portland, Oregon, Otts says.

Otts estimates the Memphis festival drew thousands of people. “There’s been some other smaller ones that have been more business oriented. As a patient myself, I wanted it more geared to the patient and not the business side.”

In 2012, Otts broke vertebrae in a fall. “After two and a half years of traditional medication, 14 types of pills to treat side effects of the medication, I started trying cannabis. And slowly but surely the medication started decreasing and my quality of life started increasing.”

He plans to hold the festival again, but, the bad news, Otts says, is, “Where we had our festival is being taken over as a parking lot. We have to relocate.”

He’s looking at Shelby Farms as one possibility.

So, getting back to Otts’ great suit. “I ordered it on line on Amazon,” he says. It’s a “Cannaboss suit” made by Opposuits. He paid $99 for the suit, Otts says, “But it was $130 worth of tailoring that made it look so good.”

Closed Due To COVID Dismiss